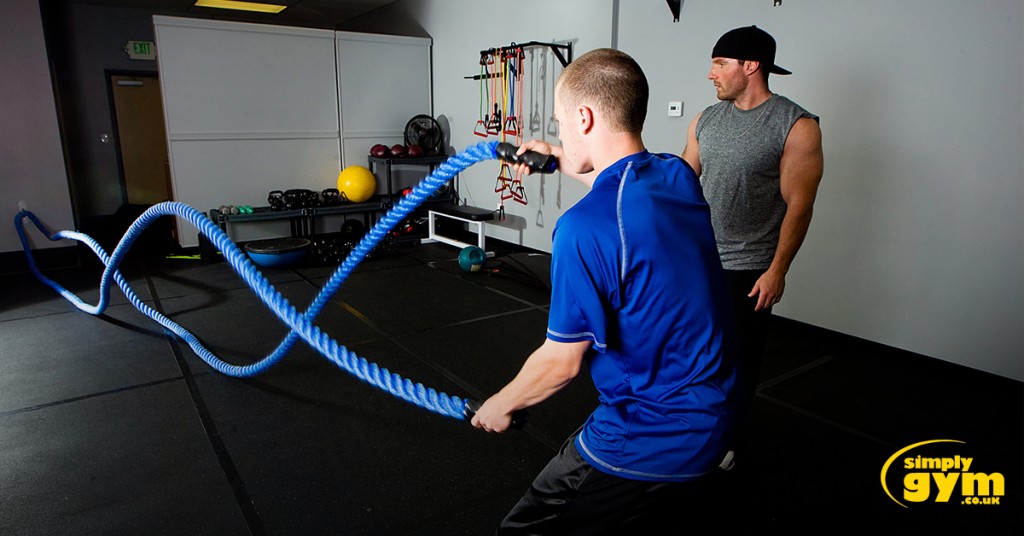 In recent years we’ve seen quite a few new pieces of equipment make their way into the health and fitness space.

You’ve probably seen them being flailed around wildly in your local gym – they’re the thick heavy ropes that wrap around an anchor point. You then hold onto both ends and perform a variety of primal slamming and twisting exercises (grimaces and grunts are optional).

Although they appear quite simple, there are a number of benefits to using battle ropes:

If this sounds good to you and you can’t wait to get started, here are four of our favourite battle rope exercises.

They can be performed in an high intensity tabata style workout, working for twenty seconds, followed by ten seconds rest. Go through the exercises in order, starting with two rounds of each, and upping the ante as you see fit.

Start by standing with your feet hip-width apart and the ends of the rope in your hands. Raise both of your arms overhead, before lowering into a squat and slamming the ropes down into the ground. Return to the standing position and repeat.

The wave jump lunges will test both your endurance and your co-ordination. Start by performing an alternating wave motion, raising your arms up and down in an alternate motion, which should create an undulating effect on the ropes. This alone is a great upper body burn.

You’re then going to combine this motion with reverse lunges, stepping your left leg back before jumping up and switching your stance. Remember to keep your spine aligned and chest proud throughout the movement.

The wave jump squat is another great plyometric movement that will challenge your core and lower body.

Start by performing the alternating waves, before exploding upwards into the air and landing in a deep squat. Keep your feet pointing forwards and your knees aligned with your ankles. Do your best to keep the undulation going throughout the movement.

The side steps are great for building agility, which is the ability to change direction at speed.

Begin with the same alternating waves, before quickly sidestepping to one side with small steps and fast feet. Do your best to time it so that your waves and your side shuffle are in sync.

After a few metres of shuffling one way, reverse the movement to the other side.