Nilla was diagnosed with Fibromyalgia in 2015 and has inspired us all with her perseverance and dedication to training. Suffering from an illness which would easily cause others to simply give up, Nilla shared her inspirational fitness journey with us. 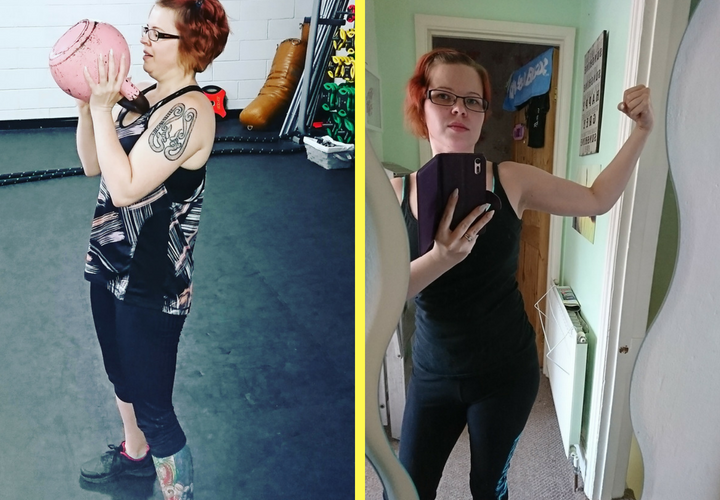 1) What were your symptoms?

I experienced many years of feeling unwell, tired, dizzy, having insomnia and always being in pain all over but mostly in my hips, neck and arms. I was having migraines or very bad headaches several times a week and I really thought I was going crazy because I didn’t look ill, I just felt rubbish all the time and was taking painkillers everyday. My doctor prescribed me stronger painkillers, but never found a reason for my symptoms. I lost myself and stopped being the outgoing happy person I used to be.

2) Do you know what the cause of your illness was?

It all started when I was in a car accident in 2010. I hurt my neck badly and ended up with whiplash and nerve damaged in my left arm. I lost control and all feeling in it for a few months after. I’m still struggling with strength and I have less feeling in my arm than I should.

It was after having my daughter in 2012 that my fibromyalgia flared up the most. After going through a difficult pregnancy, I thought I was going to get back to normal after she was born but I never did. Most people said I was in pain because I now was carrying a newborn and I wasn’t used to it, and I was tired because I was a new parent and breast-feeding during the day and night.

3) How long was the process of diagnosis?

I had never heard of fibromyalgia until a friend of mine asked if my doctors had checked me for it. So I looked it up and most of my symptoms that I been having for so many years fit like a puzzle. I asked my doctor if it was possible that I could have it and she straight away started the long road of endless of tests to figure out if that is what I had. It took 3 years of tests before it was clear that I have Fibromyalgia and Chronic Fatigue Syndrome (CFS). It was a relief to finally receive a diagnosis and know it wasn’t all in my head.

4) Are there any treatments?

One of the first treatments was a range of different nerve blockers and strong painkillers that mostly made me feel worse and very forgetful, whilst swelling up like a balloon! I decided after 2 years of feeling like a lab rat that I no longer wanted to take all of those tablets that made me feel worse and not like myself! I now only take strong painkillers when I need them.

5) What made you decide to start your fitness journey again?

It was my doctor who suggested that I should start doing some light exercise and to get a personal trainer that can help me with pain management. I first thought he was mad! How could a person that could barely can get out of bed some days be able to exercise?!

Several months went on and after a few weeks I just one day decided that enough was enough! I couldn’t live like this anymore. I was feeling so unhappy with myself. I was overweight, swollen, had no energy and had lost the will to do anything! (Even putting makeup on or get dressed was a no-go most days!) I even struggled to take care of my daughter.

It felt like I had hit rock bottom and it was time to get up and do something about it. I used to never give up and be stubborn, so I decided that it was time!

6) How did you get back into exercise?

After receiving a recommendation from a friend, I emailed Simply Gym and asked for advice and recommendations for a personal trainer. I explained what Fibromyalgia was and I was directed to Josh Sherlock at Simply Gym Kettering.

I had my first session with Josh in May 2017 and started my new fitness journey. It was also my first time ever training in a gym. We started off with just one session a week to see how my illness reacted to it. I had a few painful days but it was nice to have a different pain to deal with.

7) How has personal training helped you with your recovery?

Josh introduced me to so many new ways of exercising whilst having fun! He also made me feel very at ease, even though I felt very uncomfortable in my skin and nervous about what others might think. Now I honestly don’t care if anyone is watching me. I have never felt like I can’t tell Josh how I feel and he now can tell if I’m having a good or bad day. He’s very good at making me forget the pain and working through it, but he’s also not pushing me too hard and understands my illness.

Josh has shown me a range of exercises and techniques that really have helped with pain management and the fatigue. He’s also helped me with my diet and improved it in so many ways. I’m now trying to get 2-3 sessions with him a week and I’m setting more goals along my fitness journey – there is always room for improvement!

I can come in on a very bad day of pain and walk out almost pain-free and in a better mood.

8) What results have you had so far on your fitness journey?

After training with him for a little over a year I have lost just over 2 stone and a total of 42 inches all over my body. I’m building muscles and feeling great about myself! My fibromyalgia has improved and I’m so much less fatigued. I’m feeling more like the person I was before my illness. I will never get free from Fibromyalgia but with continuing my exercise and with the ongoing support I now have less flare-ups and more energy.

If you have been inspired by Nilla’s journey, or have an inspirational story of your own to share, then please do get in touch!